Although I’ve never read Charles Dickens novel, the book is quite popular, so I thought I would borrow the title.

First of all– I’ve heard many people ask when my next blog post would be. I am sorry that it’s been two whole months. I was surprised when I sat down to write this that it has been that long. Again, my apologies!

Now, the reason I haven’t been writing is because I’ve been busy reading! Upon our return from Philadelphia we went right into a class on the Creed -essentially a Catholicism 101- course to prep ourselves for some higher level theology in the years to come. I thoroughly enjoyed that course. We raised a lot of questions about why Catholics believe what we believe and why.

The majority of the Creed was composed to answer the questions that popular heresies were trying to answer (incorrectly) in the early stages of Christianity. Although there are questions that still surface today, we at least have the Creed and the Catechism of the Catholic Church to rely on. These early believers had to find a way to prove and pass down these teachings against the heretics they were fighting.

After that class ended at the beginning of March, we started yet another class. This time on St. Augustine. We are right in the middle of this course now and it’s starting to grow on me. Augustine was quite the guy! He has been named a Doctor of the Catholic Church for his great mind and faith in Christ and His Church, however, it was not always this way…at least the latter. I’ll write about this course I’m in at a later time. (I promise!!)

With these two classes on our plate we have also been continuing our weekly ICN meetings. We only have a few left before the year is over. I don’t know where this year has gone!

We have also been reading the new biography about Abbot Pennings that was released earlier this year. (If you are in the De Pere area, St. Norbert Abbey will be presenting a presentation with the author of this book coming up soon. Check it out!) It is a good compliment to the letters that Abbot Pennings himself wrote many years ago. This has also prompted some nice discussion on the American Norbertine founder.

Latin is still progressing. I’m finding that it is a difficult language to learn because there are so many different endings and conjugations of verbs and nouns that it is hard to keep things straight sometimes. I am however finding that my English grammar and vocabulary is improving because of the close connection between English words and sentence structure and that of Latin composition

Finally, in light of the horrible and sinful abuse that happens in our church, we are required to take a class about prevention of abuse and pastoral care of those who have had to suffer because of these men. As hard as it is to listen to sometimes, it is something that I take very seriously as I’m sure I will be working with people whose hope and trust have been bruised or broken by these men.

So that has been my semester thus far. Not to mention the additional time spent in prayer and adoration, cooking (I’ve been trying out some new recipes…I find myself getting more creative in the kitchen, and so far not too many complaints from the other guys!) going to Spiritual Direction and random chores around the house, I find myself limited in time to just relax or write in my blog.

Now as Dickens-inspired title implies, this last weekend we took leave of our Woodlawn Ave. house in Chicago

and 3 hours later we ended up in Madison, WI. 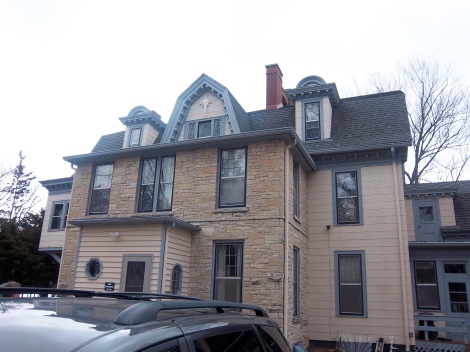 Why you ask? Well because they are both novitiate locations for St. Norbert Abbey. 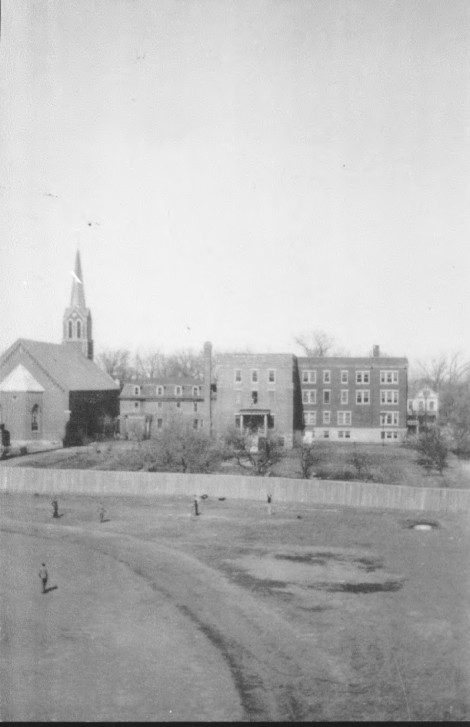 This was before the current Abbey building was erected in 1959. The community was faced with a decision…where do we put the novices? Some land was acquired in Madison, right on Lake Monona. So for some 30 or 40 years, novitiate was held in Madison before it returned to De Pere when the new Abbey was built and now in Chicago at the House of Studies.

The Madison property is a beautiful quiet plot of land right in the middle of a commercial street these days. Although, St. Norbert Abbey still owns the property, some Capuchin Franciscan friars have turned it into a house of prayer and retreat house. They were kind enough to give us a tour of the interior. It is beautiful! Although I didn’t take any pictures of the interior, I do have pictures of some of the exterior features.

The back of the house. (The front is above) This side of the house faces Lake Manona and has a great view of the capitol building from its second floor porch 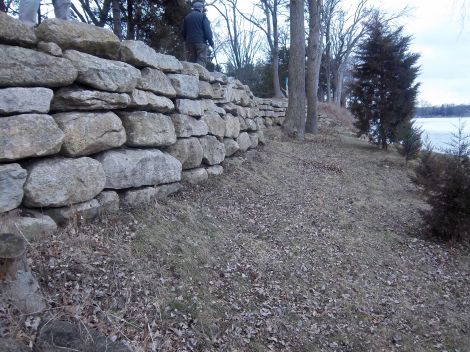 A retaining wall on the Lake. The novices (or frats, as we are called) of the past had to build and re-build this every year. Although there is now a professional company that will maintain this, these rocks were placed by young Norbertines

Before we toured the old novitiate however, we first took a trip 15 miles or so outside of Madison to a small town called Roxbury. About 40 years before Abbot Pennings came to America, another Norbertine by the name of Fr. Adelbert Inama, O.Praem. from Wilten abbey in Austria came here to establish a foundation to work with German speaking immigrants. He founded a church (St. Norbert Parish) and worked with these people. One more Norbertine succeeded him, but no foundation could be established. The last of these two men died in 1890–three years before Abbot Pennings would arrive. Pennings would have had no knowledge of Fr. Inama at the time. Check out the parish website: http://saint-norbert.org/

St. Norbert Parish. A small country church on top of a hill. They have an active parish life complete with a school. They still celebrate the Traditional Latin Mass. They have beautiful videos on their website!

The interior of the church.

A window of St. Norbert in the church 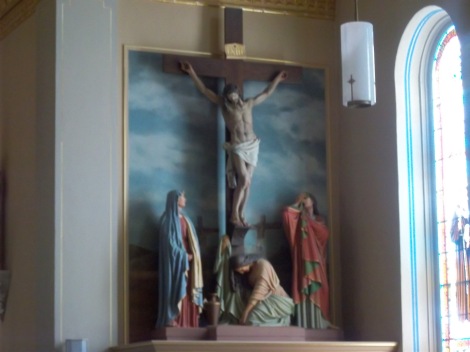 Well I think that’s enough for now, I will write soon. Take care!

2 responses to “A Tale of Two [Novitiate] Cities”